Let There be Light!

Pros and Cons to Lighting Styles for Architectural Visualisation

Beautiful 3D visuals tell a powerful story and a major part of that story’s appeal is the type of lighting that is created in each image.

We draw our viewers in with light – sometimes, soft light is what the image calls for, to create the welcoming look of a morning view, or other times, a change to more moody lighting helps create the exciting look of a night-time shot, as shown in a couple of examples below. 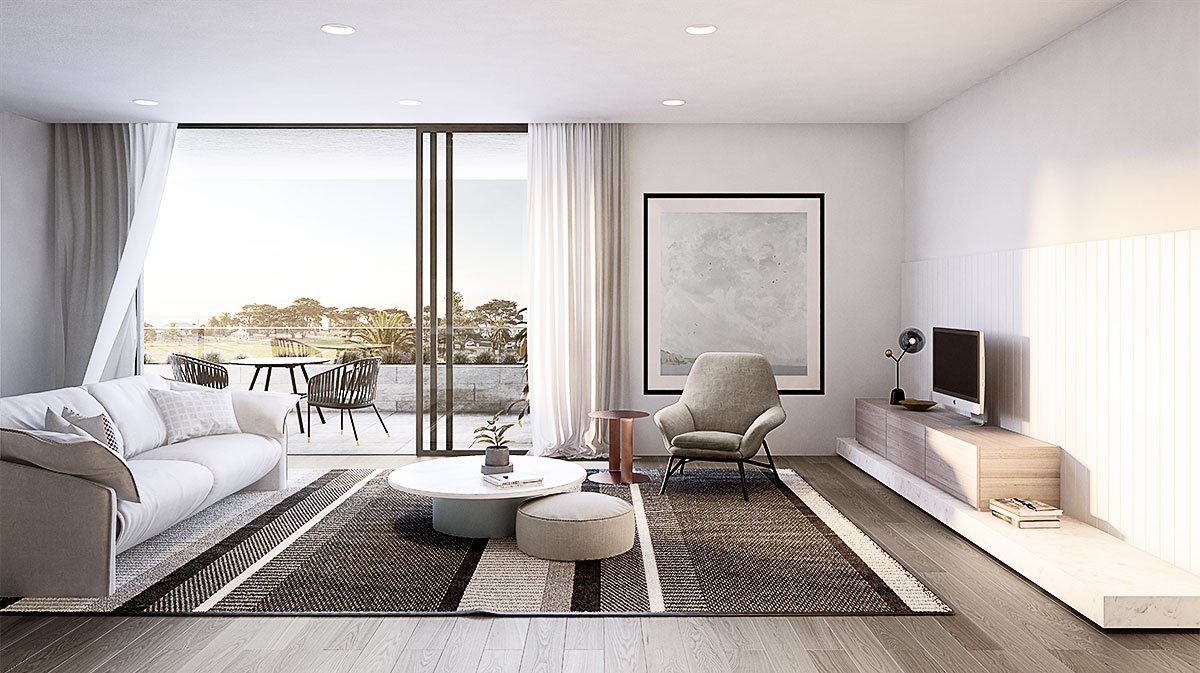 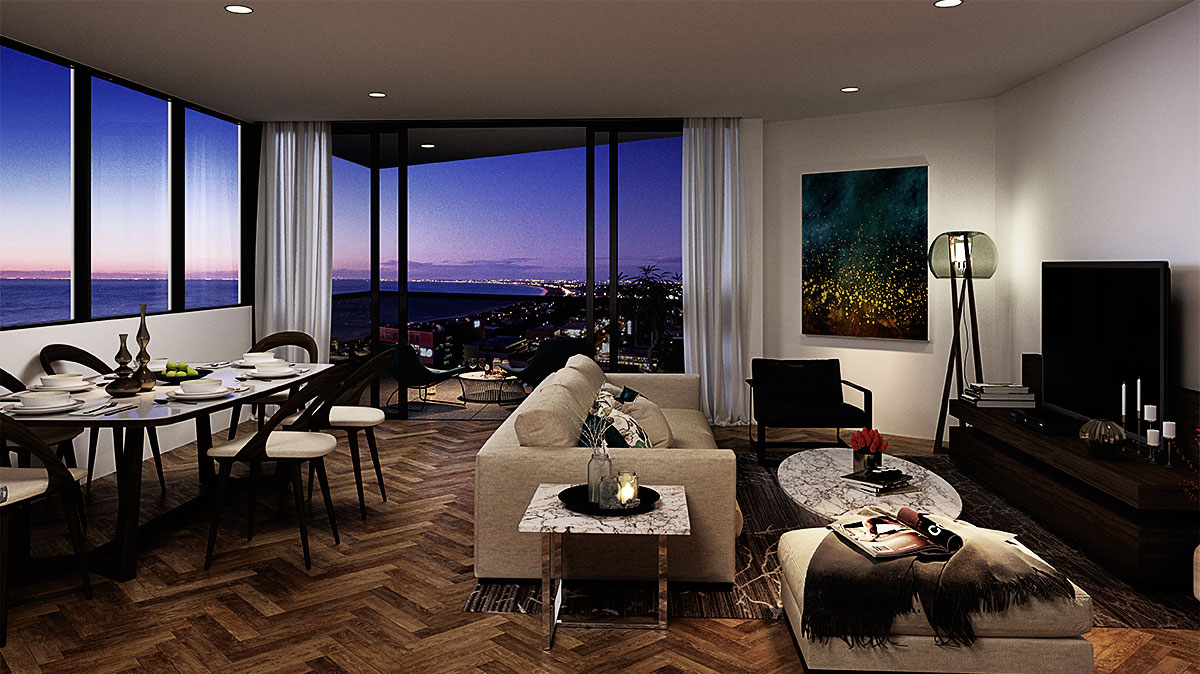 As everything is being simulated, our options are endless, but it is important to remember that everything needs to align with an overall guiding strategy for the images. If the marketing campaign is geared towards a certain demographic, then the 3D images should respond and align similarly. For example, if the target demographic is older buyers in a conservative area – then the choice to use twilight shots, with all lights glaring, is probably not going to connect as well as something a bit less moody, with a gentler feeling to the image.

Typically, some consideration is given to the orientation of the property to show how the sun would move through the sky and where the shadows should be placed, however, as the marketing 3D images are “artist impressions”, a lot of things are tweaked beyond the normal conditions, which removes the reliance on accurate sun movement. In the case of 3D photomontages for planning, the movement of the sun plays a significant role, as these images have to be accurate to the context and conditions of the location of the project.

For exterior 3D renders on the spectrum between day-time and night-time, the main factors that need to be considered are the treatment of windows and how green the landscaping needs to look. In the example images below, you can see how various lighting styles impact both of the factors above and what the workarounds could be.

Alternatively, for interior 3D renders – unless the backdrop calls for a different lighting style to match a view that is being inserted into the image – they are typically created in day-time lighting to ensure that all details are able to be seen and then the shadows across the floor create the contrast and perception of depth to the 3D image. The most typical lighting style in 3D visuals is a nice sun-lit sky with a few clouds during the day. It allows for a clean image with green foliage and strong shadows. Stronger shadows create contrast between light and dark throughout the image as it adds depth and realism to the 3D render.

The main challenge in a day-time shot is how the windows in the buildings are presented, which often go dark as the light and sky reflect off the windows and, even if we place window furnishings or objects behind the glass, it’s tricky to show lit-up windows showing through to interior styling and furniture, as it’s not natural to have inside lights turned on during the day-time. 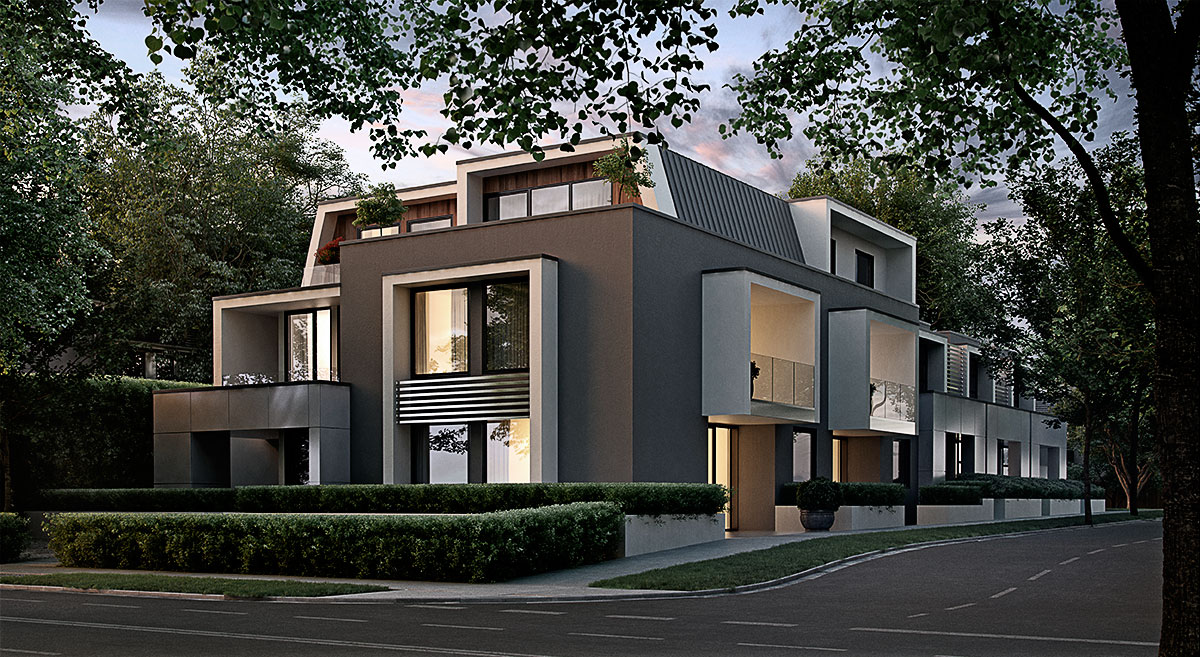 To overcome the dark windows issue in day-time lighting, if the 3D render is created later in the day as the sun is just above the horizon – then it starts to make sense that interior lights may be turned on and some residences would be lit up.

Also, the sky can then be tweaked to include extra colour hues and add a bit more mood to the image. In this light set-up, the landscaping and foliage still comes through green, although it is not as bright as during the day-time. 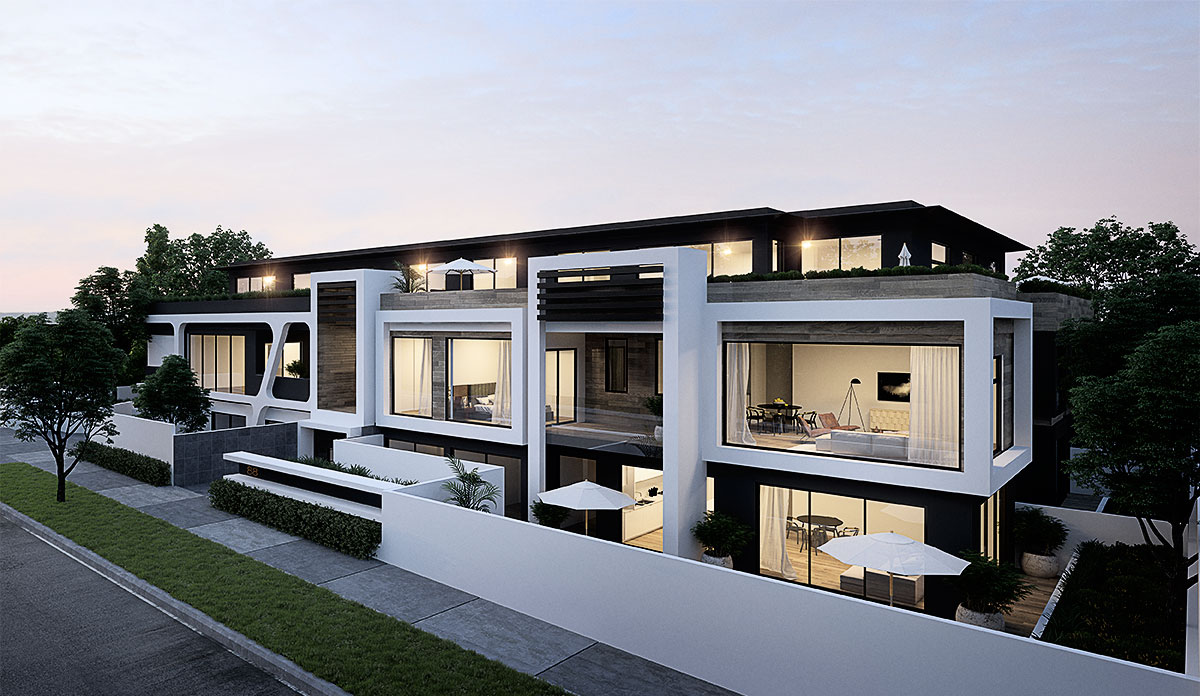 If the image was created a bit later in the day, then it starts to make sense to light up even more of the windows and we can now clearly see into the interiors and how everything is laid out. The main challenge now becomes with the green of the landscaping, as it starts to get pretty dark and can throw the image out. 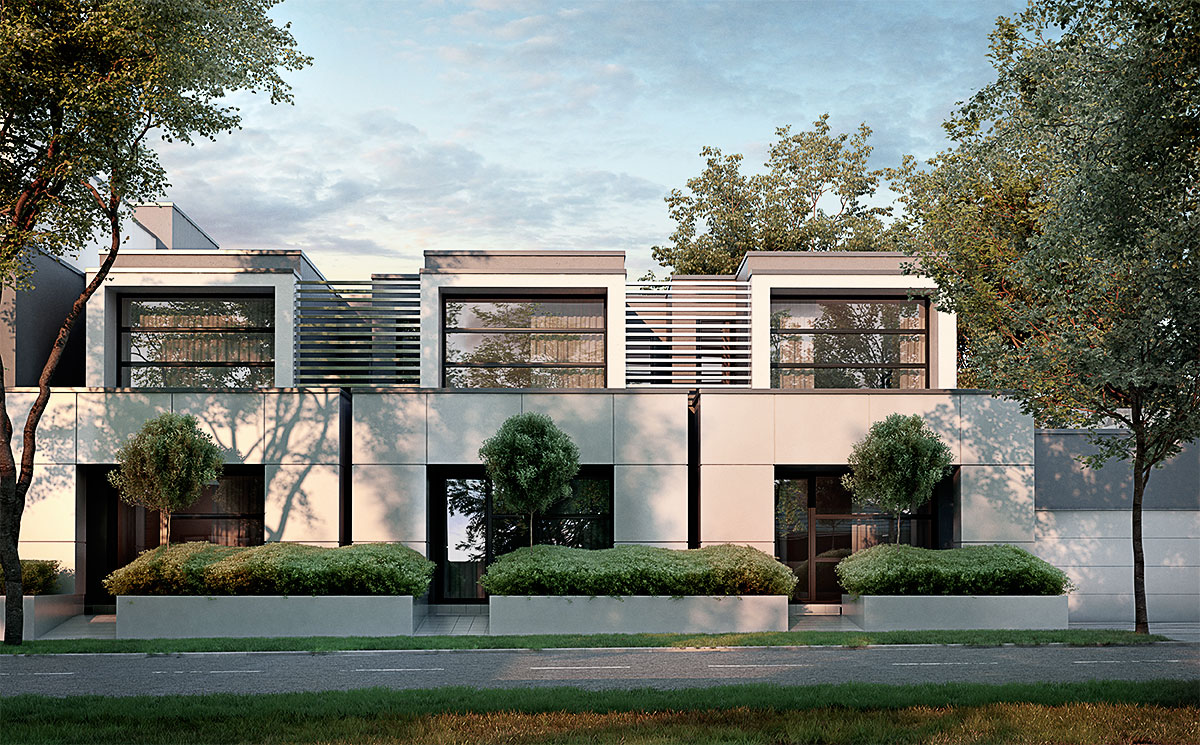 Another way of handling the challenge around green grass and lit-up windows is to go for an early morning shot as the sun is just about to rise – in that time just before sunrise, both light window glass and green foliage come up well, as well as warm lighting that fills the shot and creates an inviting and appealing mood to the image. 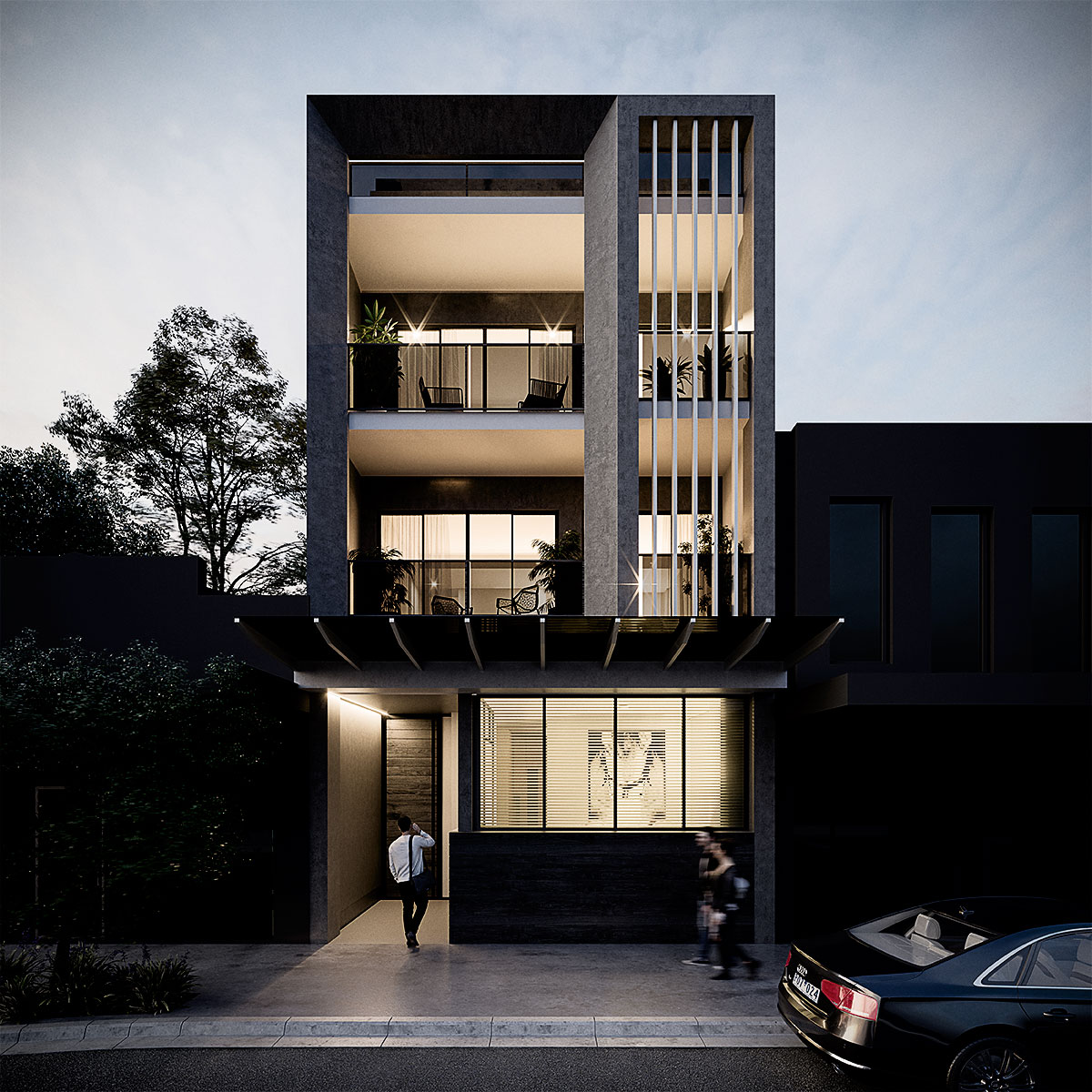 For more urban environments and younger demographics – late lighting allows for a lot more dramatic focus on the project building, as everything can be lit up and our eyes are immediately drawn into the building, while the surrounds fade.

Whatever lighting effects you prefer, it’s important to understand the impact lighting can have on the quality and appeal of your 3D visuals. To make the most of your marketing, think about the target audience for the project and choose lighting that suits that, as well as the look and feel of the architectural design and neighbourhood.

Getting them right matters.